Monday was a holiday in BC. It was warm, sunny and blowing 5 to 15 in the San Juan East Entrance so we decided to go for a sail. Actually it turns out it wasn’t much of an original idea as several other boats cast off as well and we all went out to enjoy the day. It took an hour or so to get the boat ready, but eventually we cast off. Once we cleared the Victoria harbour entrance we rolled out the sails and decided to head dead downwind and try and make it out to Race Rocks.

Red line for our trip out downwind; Blue line for the close hauled trip back (rough approximations)

I’d recently gotten my preventer situation all sorted out, so I was eager to give the new system a try. The winds were blowing about 12 knots just off the dock, but by the time we were clear of the harbour they had settled down to about 8…perfect for some wing on wing action. Once we got it rigged correctly (I managed to forget about going under the jib sheets and tried a few variations on which winch I was going to use), Leslie sailed for a couple of hours with little or no effort required. It’s amazing how much easier it is to sail downwind when you only have to worry about luffing the jib.

Now Hunters aren’t known for their downwind performance due to the B&R rig (our spreaders are swept back so you can’t put the mainsail out as far and our small jib doesn’t help much—see the image above) but I have to say, in light winds we do pretty good. We were doing 2.5 knots in about 6 knots of breeze and 4-ish in the 8 to 9 knots.

The HMCS Whitehorse (a Kingston class coastal defence ship) popped out of Esquimalt as we headed south and eventually got on our track before veering to port and then coming up along side. Since Leslie had gone below and it looked like I would have to jibe anyway, I also went to port to see if I could scare them. After all I was a sailboat and had the right of way. I let go the preventer from the cockpit, centered the main and jibed all by myself much to L’s consternation. Still, it proved the system worked. Unfortunately for me, I had misjudged the Whitehorse’s speed and she passed by without really noticing us. Eventually she crossed back in front of us and went to stooge around in Pedder Bay. 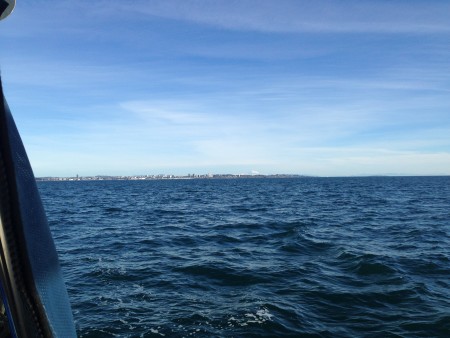 Victoria from about half way to Race Rocks. If you squint really hard you can see Mount Baker centre-right)

As we approached the lighthouse on Race Rocks we decided not to run the passage and simple came in close. The water was starting to churn up so we decided to tack around and start heading back upwind. The winds had start to slowly build so by the time we hit Race Rocks the apparent wind was around 11 knots. As we swung around and headed up wind it banged up to around 15 knots and of course the current had changed so we hit really choppy water where minutes before it had been calm and peaceful. So we decided to try a reef.

I had been doing a lot of reading about reefing Hunter’s big roller furling main and decided to try out a few of the theories. All in all they worked like a charm:

It all went pretty smoothly. At least smoother than a lot of our previous reefing scenarios. I think there is something to be said for the “simplicity” of a traditional main when it comes to reefing. At least in the process. But I imagine with a bit more practice this too will start to seem simple. And it turns out the top spreader is a perfect reef point for about 14 to 18 knots of wind. We were heeled about 10–20° most of the time the winds were in that range and the weather helm was pretty negligible.

Of course the winds weren’t going to be that cooperative. After our first tack, they started to climb and now ranged from 19 to 21 knots. Another reef was looking necessary. But since we weren’t really going anywhere and we had cleared Albert Head, we just tacked again and settled into steady 17 to 19 knots which was pretty comfortable with the reef we had in.

By this time we and all the fishing boats had been joined by the HMCS Ottawa, one of our Halifax class frigates. She came out of Esquimault and also started stooging around, mostly off our starboard. When I turned towards her she scurried off so I guess we’re just plain scary. Or my sailing is… On one of our tacks she did get close enough to our stern that we got a good impression of her size. I am not sure what the two RCN ships were doing but they were tracking back and forth in a definite pattern so it was some sort of training exercise.

As we came back towards Victoria we crossed paths with a Nauticat 33 with all three sails up and (I) immediately started racing. I certainly have a career in racing slower boats because we caught up and passed them in no time at all. It must be weird sailing one of those from high up on the stern. We tacked back and forth a couple of times still experiencing winds anywhere from 16 to 21 knots but the Nauticat tacked a lot less and plodded along quite steadily. For us, it was a lot of fun and a 25–30° heel doesn’t seem so bad if it’s not happening because of gusts.

They eventually dropped their sails outside the breakwater while we tacked once more and sailed right up to the coast guard station. On the way in we spotted SpringTide which is the big whale watching cruiser that is normally tied up off our bow, so I knew we had an easy docking ahead of us with lots of extra room. We fired up the engine and pulled down the sails in the outer harbour and slowly motored back to our berth.

As we pulled into our spot the wind was pushing us off the dock which was a first for us in Victoria. I muffed it a bit so was glad for the extra room courtesy of the missing SpringTide. One of our dock mates was also on hand to grab a line but Leslie wisely demurred from handing him her midship line and tossed him the bow line instead. It never pays for us to vary our docking routine and while I am pretty sure this guy was way more salty than I will ever be, we’ve had a few bad experiences with dockside “help”.

It was a great day on the water followed by a couple of cold ones to close it off.

A Word on Dock Gravity

It seems we haven’t done as much sailing as I had intended when we got to Victoria. One of the reasons why is that a liveaboard boat in the marina quickly becomes unsailable without a lot of work. We have an electronic checklist that goes through all the major tasks to get her ready for the water, including untying all the things we have tied down and tying down a bunch of things we don’t. We put everything away and clear off all the tables etc. but inevitably, as soon as you start to heel, all hell breaks loose and all the drawers and cupboards you haven’t latched come flying open and things that you thought were stable suddenly gain momentum and bang and crash down below.

On our trip today this was pretty incremental. A few bounces in the 10 knots, a few bangs and crashes in the 18 knots and a couple of monumental clangs in the 21 (that was mostly the tea kettle breaking loose and, I think, a couple of cans from the forward locker). I suppose we will learn, but it never fails that something goes for a ride no matter how much we prepare.

Coming back in you have another good hour or so of battening and organizing to do to get back to liveaboard mode. Running rigging need to be secured against banging, extra dock lines and fenders put out for those stormy nights, enclosure needs to be all snugged down again, sailing gear stored out of the way, cushions piled and tucked out of the way and of course all the books need to come out from the nooks and crannies we had stuffed them in. After a great sail like that it does all seems worth while, but after a few days or weeks have passed you get more and more reluctant to go through it all just for a few hours of fun. I’ll have to be sure to come back and read this post again the next time I get wingey about wanting to go sailing…

3 thoughts on “A Holiday Monday Sail”