A Choice, A Choice, My Kingdom for Less Choice

In fall of 2013, I left my job and spent the next year doing mostly contract and freelance work or, more often than not, not doing any work at all. At roughly the same time Leslie’s appointment as Chair of her department finally ended. And at the end of 2014 she applied for a Sabbatical. It was then I started dreaming. Of boats. And as those of you who have bought boats know, that means spending hours on sites like Yachtworld.com I hear it’s an addiction.

Late November 2014, I came across a posting for a half share of a sailboat in the BVIs on the Cruisers Forum I had started to habituate. A fellow in Winnipeg owned a half share in a Morgan 381 CC and his current partner was selling his share. We exchanged a few notes and it started to look like we could buy a half share for a very reasonable price and use the boat for most of the year of Leslie’s sabbatical. But we were the third in line and the guy who got there first bought the share. The whole story is here.

At the beginning of January, Tim Melville posted his intention to do a May circumnavigation of Vancouver Island and was taking on passengers. Leslie and I hemmed and hawed, and, for much the same reasons we jumped at the Broughtons trip, decided to book two spaces on his 42′ Baltic. That way I could work on my Coastal Skipper and maybe start in on my Yachtmaster.

Late January, 2015 went back to the Vancouver Boat Show. Fun, but still no boat in our future. Although Leslie determined she liked Hunters. And I determined I liked the Catalina 445.

One thing that did happen at the boat show was we stopped and chatted with Ian and Shari of Nanaimo Yacht Charters, two of my favourite boating people. I had noticed in fall of 2014 that they now represented Gemini Catamarans as dealers. The Gemini cats have one of those love/hate relationships with people that some boat models have (Hunters seem to also suffer the same fate). I had no particular interest in a Cat but it would be a great platform for the sabbatical and provide lots of space when Leslie need to actually do some work. It occurred to me that maybe we could buy a boat for the year, then put her in charter after the sabbatical was done and still have a boat to sail whenever we wanted.

Ian made it worse by tempting me with offers of flying us to Miami to cruise on the new 2015 Gemini free of charge. We could buy the boat, cruise the caribbean for a while and then have it shipped back to the PNW by truck. All for the low-low price of a signed offer to purchase. This was the one and only time I seriously considered financing a boat. But no, it really didn’t make that much sense, so I told him to stop teasing the animals.

But it did get me serious about what I wanted out of a boat and what would work for Leslie and I. So I stared making a list.

My intention for Leslie’s sabbatical was to take her as far away from work as possible. (She had/has her own intentions but I have so far successfully managed to not let them interfere with my dreaming.) I investigated buying a canal boat in France, a sailboat in the Mediterranean, renting a villa in Spain, renting a cabin in the woods, taking a round-the-world cruise with Cunard and even buying a whole boat of our own in the Caribbean. Everything came with pros and cons. The biggest con for many of my schemes was that if we spent the money on a cruise or a villa, then that was money we would never see again. The benefit of buying a boat (I kept telling myself) was that if we did, we could recoup some of the expense when we sold it again.

During one conversation with Leslie where I was trying to sell her on the Caribbean idea, she mentioned that she’d be more comfortable in BC and I rebutted that winter on a small boat in BC might not be as pleasant as all that. Then she mentioned Victoria. Victoria has some of the nicest winters on the coast (i.e. actually has some sunshine). Leslie and I love Victoria. Victoria has libraries and museums and universities and parks. And I recalled that there were lots of liveaboard marina’s in Victoria. What a great idea.

A bit of investigating showed that both the GVHA (Greater Victoria Harbour Association) and Coast Victoria Harbourside Hotel and Marina offered 6–8 month winter packages for liveaboards during the winter season at really reasonable rates. A definite opportunity seemed to exist.

The next trigger was the appearance of Angelina II on Yachtworld. I recognized the name and looked her up. She was a 2004 Hunter 41 that had spent some time in Nanaimo Yacht Charters fleet. This set off that train of thought that this was a boat we could buy a boat for the year, then put her in charter. I sent a note off to Ian at NYC asking what he thought of her. He agreed she was a fine vessel but not to pay more than $130,000. While this was still out of our price range, it was possible with some creative financing and $27,000 less than asking. If we could imagine boats would go for $30,000 less than asking then our whole boat market had just opened up.

I asked around for some advice about brokers and decided to engage a buyer’s broker to  enquire. Brokers work a bit like real estate agents in that the seller pays for them and if there are two brokers (buyer’s and seller’s) then the fee is split. The buyer pays nothing. I contacted a recommended broker and set some wheels in motion. But alas, there was an offer on Angelina II already and she was no longer available. But now I had a broker.

To follow this next bit, you have to have an idea of my relationship with phones. It’s bad. I hate them mostly, avoid them as much as humanly possible and will ask anyone else to make  any necessary calls if at all possible. This is important for two reasons, the second of which will come closer to the end of this long and meandering tale. But for now, its important to realize that my broker was old school and I am addicted to the non-phone-like properties of email.

We never did talk. I would fire off emails full of detail and questions and he would reply with one word sentences and the very occasional paragraph. Now don’t get me wrong — all indications were that he was doing everything I wanted but conversing via email was just not his thing. I’ve run into people like that before and he had all the signs. I suppose I should point out, at this point, that we live in Edmonton, a few thousand miles from any boat we may or may not purchase. So we were relying on someone else’s eyes and ears to check out boats. He sent us a few prospects, but none really appealed.

I hadn’t given up my Yachtworld addiction and would fire off notes to my broker about boats I had seen and even went chasing after a 2007 Gemini catamaran that had been on the market for months. Listed at only $129,000 and new enough to go into charter after our year.  But alas, another too little, too late prospect as after months of showing up in my online searches it now had an offer on it. 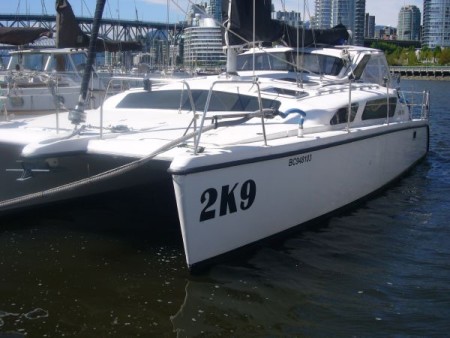 At this point I should mention a few things on our boat wish list. A roomy main berth. I had too much experience trying to hop out of bed suddenly in the cramped aft berth of the 33′ Shearwater that I knew I wanted a berth I could easily hop in and out of. Ideally this would be a centerline queen (with access on either side) like the Angelina II had but those were mostly in 42′ foot and larger boats and those were starting to look like impossible buys for us. I wanted some work space for Leslie. She has her own set of work habits and I wanted to accommodate them as much as feasible. Two heads or at least a separate shower. Having to wipe and dry the shower after every use just to use the mirror would wear pretty quick. Counter space in the galley. Again the Shearwater had taught me the frustration inherent in having to move all your prep to use the sink or open the fridge. It would get old fast. Lastly I wanted a good size holding tank. We’d been on at least one boat where it seemed we had to empty the tank every day and that wasn’t much use if we were  planning on spending a lot of time in one place.

Other wants included a full enclosure for the winter, good electronics, bug screens,  a good heater, a bigger dinghy and decent outboard, at least 100′ of chain and an autopilot. But these were all things we could add later.

After I announced I was actively looking for a boat, Dave W mentioned the existence of a 36′ Nauticat a few slips down from him in Blaine. It was an 1985 and the asking price was 85,000 usd. Dave mentioned the owner was willing to dicker if it was a private sale since it would save him the broker’s fee. Now I had actually seen this boat before. Their tender was a Portland Pudgy and I had come across  pictures of it on the site they had been building in preparation of selling.

The Nauticats are Finnish boats that are pilothouses. This means that they had two helms, one in the aft like a regular sloop and another inside a raised pilothouse. This model was a cutter rigged ketch. Cutter meant it had the possibility of two foresails and ketch meant it had a second mast (the mizzen mast) behind the main mast. The pilothouse divided the main aft stateroom from  the galley and v berth in the bow. It also featured a table, small dinette and lots and lots of light.

While this was not the sail-boat boat I wanted, it definitely interested me as a liveaboard.  I contacted the owner and we exchanged a few emails. It sounded like a well loved and well kept boat. But that was when the obstacles started to appear. The first obviously was $85,000 usd was now around $106,000 cdn. Then it looked like GST would be due if I imported it and finally, since the boat was not made in the US then a 9% duty would also be applied be bringing the grand total up to around $120,000. While $120,000 was within the realm of possibility, it was unlikely anyone would want her in charter since she was so old and a bit of a white elephant in the charter business. That meant we would likely have to sell her and then we would take a big hit when selling. But she seemed like a great fit for our needs.

So I made an offer. It was really low. The response was quick, definite and very polite. “Good luck in your boat search.” And another one bites the dust.